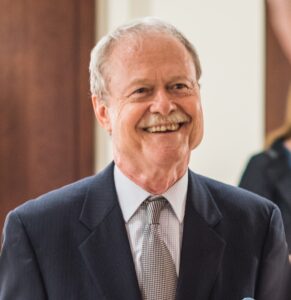 Robert “Bob” Pohlman served as CNHED’s Executive Director from 2000–2014, and was a beloved figure in the community development field, as well as a great friend, mentor, and colleague to so many of us. Bob’s work at CNHED followed a 23-year career in the District of Columbia government, where he served as Director of the Department of Housing and Community Development, Deputy Mayor for Finance, and Chief Financial Officer. His first post with the DC government was with the Model Cities Program, first as Fiscal Monitor, then as Budget and Accounting Officer. Bob began his career as an auditor in Chicago, but found his calling in public service while serving in Jacksonville, Texas, as a VISTA Volunteer. His career embodied a true commitment to public service.

Bob passed away in Spring of 2018. In light of his legacy, CNHED created the “Bob Pohlman Lifetime Achievement in Community Development Award.” This award is awarded annually to an outstanding local leader with at least 20 years of consistent service and leadership in the District of Columbia’s community development field. The winner receives $5,000 and a ceremonial plaque.

Join us for Community Development Week!

Become a member of CNHED today

and join the fight for a District where all residents can live in thriving communities that are racially, economically and socially just!

Stay in touch with CNHED news & events by subscribing to our free e-newsletter.